Detroit City Is The Place To Be by Mark Binelli is the latest in a long series of books and magazine articles chronicling the decline of industrial cities of the American rust belt.  None seems as shocking as this new book.

Binelli summarizes the picture with one startling fact: 30 percent of Detroit is open space, some 40 square miles, two Manhattan Islands,  formerly filled with residences and businesses, compared to 47 square miles the size of all of San Francisco! Detroit had 90,000 buildings left abandoned. 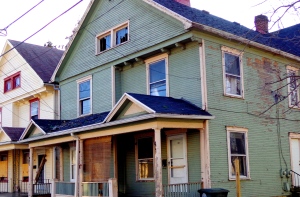 How can a citizenry allow such widespread decline to happen? Binelli treats all the factors: white flight, public education, economy, crime, declining tax base, racism, and politics and politicians.  There is enough blame to spread around. 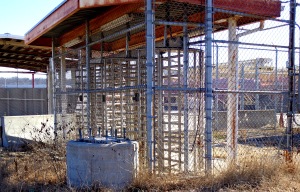 Binelli moved back to his home town to join writers, artists and others who want to reclaim the abandoned parts of the city. Their successes are and will be minimal compared to the size of the problem. 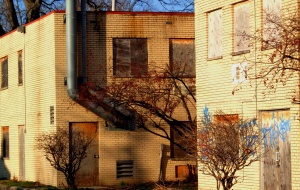 Binelli and his friends sneaked into the five story Packard plant, some 35 acres, abandoned in 1958 and now a plundered hulk to savor the urban ruins photographed by people from all over the world who compare it to the Acropolis as a tourist destination point! The suggestion to make Detroit a tourist attraction may have more hope than any urban renewal programs.

The Afterlife of an American Metropolis is the subtitle of the book and assumes a need for a resurrection which will require radical new thinking about race and metropolitan government, something not expected anytime soon. There seems  little hope for the city,

To appreciate the urban ruins that make up much of present day Detroit check out these striking images on the internet.

The images used here are from my city. How far behind Detroit is Dayton? Abandoned Chevy truck plant below.

Octogenarian
View all posts by paaron1 →
This entry was posted in Uncategorized and tagged cars, mark binelli, urban renewal programs. Bookmark the permalink.

3 Responses to ABANDONED: a book review